Ok so I was mapping out this really great blog post about all of the technical aspects of the bus build and I was going to get everyone up to speed on our progress. I start typing… Duh I almost skipped the best part of our bus endeavor this far, getting the bus and the journey home! How could I forget?

Well, first let me tell you the woes of a Midwest bus shopper. After the idea to live in a bus was conceived and approaching realty, the searched for a bus was ON. Where do you buy used affordable school buses? Craigslist right? Maybe Ebay… sure. We started with local Craigslist searches thinking that would be the best way because then we could actually lay eyes on it, test it out, you know ‘kick the tires’. After combing through what were mostly used church buses we found one that seem like it would be worth checking out. It was only about a 45 minute drive to the church that was selling it so I grabbed the girls and headed out. When we got close it wasn’t hard to find the church because it was right behind a 40 foot lime green school bus. How exciting! We are looking at our first school bus and let me say at first it seems HUGE, especially if you haven’t stood next to one in a long time, like since you were in school. So after giving me the run down the gentlemen showing us the bus let me drive it! Ok, now I’m really excited! It was a blast and if I don’t mind saying, I’m a natural. It wasn’t hard to drive at all. I even backed it into a spot between cars. After bringing the green giant back to it’s holy abode I started to really inspect the underside, engine bay, etc. Not good. It became immediately apparent to me that this old girl had seen better days and none of them were ever in a dry climate. The rust far out weighed even the $2,500 price tag. It would be a waste to put the kind of effort into it that we were anticipating. So we kept looking. I mean its not like I actually thought we would end up buying the first bus we looked at (yes, yes I did think that

Anyways, the search must go on. Now we know what we are looking for. Full size, 90’s or newer, International drive train, little or no rust… Yeah lets talk about that rust. After exhausting most of the local listings it dawned on me that our location was our biggest enemy at this point. Trying to find a bus with little to no rust wasn’t going to happen, at least not in a reasonable price range. This was kind of a bummer because buying a vehicle out of state just seemed like it would be a total pain. But what choice do we have? So we started searching southern states and even out west. Through some fruitful Google searches we found a few used bus dealerships that had options in our price range. One was in Florida and the other was in Arizona. Not exactly neighbors to Illinois but hey, that’s the idea right? No snow = no road salt = no rust, I love math. After having made a few phone calls that is just what we found… NO RUST! Both dealers said their buses had no rust. YES!! The dealer in Phoenix seemed to have the best deal of the two and he was much easier to deal with so despite my initial concerns, working with a dealership turned out to be an easier way to do the transaction. They have all the paperwork handy, temporary plates, and I was even able to bargain extra parts into the deal. After lots of phone conversations, emails, pictures and videos from the dealer we were convinced that this was the bus for us! Now what? We just fly down to phoenix? Well we can’t take a 9 month old in a bus for 3 days which ruled out Rachel and Charlotte coming along. So I enlisted my brother, Max, to fly down with me and co-pilot the journey back. He was more than willing!! So we bought two one-way tickets and headed out that weekend! We landed in Phoenix and walked out of the airport to wait for our ride (the guy from the dealership was picking us up). It was hot and dry and hot. Oh and did I mention it was hot? Wearing jeans and leather work boots immediately became a regret, at least for the time being. Once Max and I had located our ride, we were given a brief tour of the area surrounding the dealership. It was the kind of neighborhood that would make your average person uncomfortable to say the least. Our ‘tour guide’ described it as being “saturated with meth” and I had no reason not to believe him. Once we finally got to the dealership I was able to pick her out of the crowd right away. I’d only looked at the pictures a thousand times. After negotiating for extra parts and a spare tire, we struck a deal and made it official with a little money and enough paperwork to give you a hand cramp. I now own a bus; the keys are in my hand. All I have to do now is drive it home. From Phoenix. To Chicago. 1,800 miles… oh and I have to be at work by 6:00 am on Monday. Not wasting any time Max and I threw our backpacks in the bus and headed out. The feeling of pulling a full size bus out of the dealership was indescribable, truly. It was beyond any level of excitement I had felt in years! After realizing how starving we were, a quick pit stop for food and supplies was made. Walking back to the bus, I threw the keys to my little bro and his smile, when he got behind that giant steering wheel, was as big as mine. Seriously who wouldn’t want to drive a bus?

We are home bound and smiling ear to ear. We had no way to charge our cell phones so Siri had to sit this one out, oh and no radio either. We busted out our Atlas that was picked up on our supply run, to navigate our route home the old fashioned way. It didn’t take long to find ourselves at the foot of the mountains, it was time to see what this thing could do. Thirty. It could do 30 miles per hour up the more intense mountain grades. Thankfully there was no overheating, which is saying a lot considering the Arizona heat. Up was interesting but down was straight up white knuckle. At one point on our way down the mountain, there were several continuous miles of STEEP grade. Knowing that you’re not supposed to ride the brakes, which would cause overheating, I tried to stay off of them. Our speed was really starting to pick up all while the road continued to twist and turn sharper than you would like. Just when I thought we were going fast down the side of this mountain the semis started flying by like the bus was standing still. No Thanks. It was getting late and we were completely exhausted from traveling and all the excitement. Somewhere in New Mexico on an Indian reservation, we pulled into a lonely gravel parking lot that was across the street from a gas station. We parked the bus where we had seen a campervan, a semi, and a guy sleeping in the gravel next to his motorcycle. We kept the bus idling all night since it was freezing out and we needed to keep the heaters going. When I woke that next morning the

sun had already come up and I wandered over to the gas station where I had some of the worst coffee I have ever tasted and had to answer a lot of questions about why I was driving a “prison bus”.

After getting some much needed rest and restoring our caffeine levels we hit the road. For the next 24 hours we did nothing but drive and stop for gas. We made it from New Mexico to Illinois in a straight shot. I loved seeing the drastic change in landscape going from New Mexico to Illinois is such a short amount of time. Arizona and New Mexico’s scenic beauty was refreshingly unfamiliar to a flat-lander that doesn’t get out much. Once we made it into Texas and north of there it became all too familiar: farm fields, grass, corn, little change in elevation. It made for a long, boring stretch of road. Skip ahead 1,000 miles or so and we’re near home. I called Rachel to tell her we were close and to have her clear the cars out of the driveway. We weren’t quite sure if we would even be able to back it in from our narrow street into our even narrower driveway. But good news: our wheelbase is conveniently short which 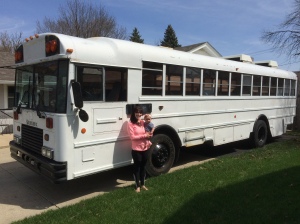 made backing the bus into the driveway possible in one easy maneuver. However, the bus is taller than the lowest part of our roofline, which resulted in a gutter casualty (by no fault of my own *cough* Rachel *cough*). All afternoon we loved looking out the window and seeing OUR bus in the driveway! How surreal! The neighbors on the other hand may not have liked it as much as we did 😉

5 thoughts on “Phoenix to Chicago”